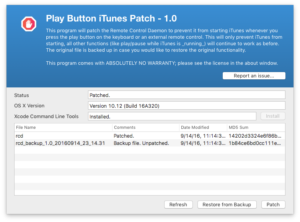 Apple will be releasing macOS Sierra this coming Tuesday, September 20th.  This also means that the rcd file will be replaced with the stock version so you will have to patch it again. I upgraded one of my computers and was able to verify that the patch still works as expected.

One user reported that they were having code signature issues after patching, but that turned out to be an issue with the Xcode command line tools.  Take a look at the github ticket for more details.