This entry was published on Wednesday, November 29, 2006 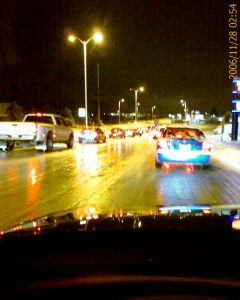 I had to come to Seattle for work, and the day that I picked to be here was the day that Washington had the worst weather in almost 20 years! My flight landed in Seattle around 9:45pm and my drive to the hotel in Tacoma, which was about 21 miles, took almost eight hours!! That is not a typo, it took me EIGHT hours!! It was amazing, the traffic was stopped for hours and hours! My average speed for the first seven hours was about 1.5 miles per hour!

All of this was because it usually doesn’t snow much in Washington, so they don’t have the right equipment to deal with it; and it snowed about two inches before my flight landed. Again, that is two inches. Add to that the fact that most people hadn’t driven in snow before, so they were either going extra slow, or extra fast, resulting in accidents; both of which added to the delays. And if that wasn’t enough, the temperature were below freezing, so the roads just became an ice rink. Want more? The roads in and around Seattle and Tacoma are generally sloped, at some places, at quite an angle. So if you had a rear-wheel drive, you can forget about making it any further on that rink! 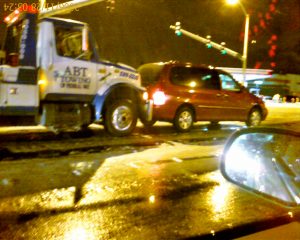 Want even more? There is more! Because of the long delays, cars started running out of gas. So, there were cars abandoned in the middle of the road. Most of the people couldn’t even push their cars to the side of the road because the roads were so slippery; and anyone who wanted to try would probably end up on the road. What an amazing eight hours it were! 🙂 You could walk quicker!

One of the factors was the Seattle Seahawks vs. Green Bay Packers game that increased the normal traffic to crazy amounts. 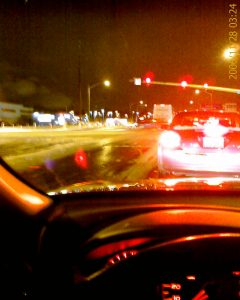 A lot of people are saying that this happened mainly due to the Seattle drivers, I disagree. No matter where you live, you couldn’t drive on these ice covered roads without ice chains on your tires or other specialized tires. From my experience, I haven’t seen many people with ice chain, even in the cities that get lots of snow. The main reason that only two inches of snow caused such massive delay was that the snow wasn’t plowed right away. If this was done in time then this wouldn’t have been a problem, as all of you folks living on the eastern part of the US know.

I was listening to radio as other drivers, stuck on other routes, reported what they were seeing: trucks and city buses stuck in the middle of the road, people abandoning their cars because they ran out of gas, cars in the ditches, accidents, bumps, slipping and sliding vehicles, amazing stuff!

All this brings one main question to the mind: Global Warming, is it real?