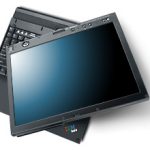 I just ordered the Lenovo X60 Tablet! =D After spending a lot of time researching the tablets and the options, I ended up with the X60 because of my target use. Part of this was the MBA, which I will be starting either this Summer or this Fall depending on which school I get in. I wanted the machine to be light, quiet and ultra-portable, and X60 was one of the best options. Now I am going to anxiously wait for it to arrive by the 5th of April! 🙂 I will definitely be blogging more about my experience and maybe even a review is in line 🙂

Below are the specs and explanation for my choices.

Below are some links that helped me with the decision, you might find these useful.