This entry was published on Sunday, April 20, 2014
MacBook Pro Surprising 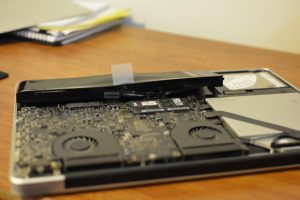 A few days ago I noticed that the trackpad on my older (mid-2010 model) MacBook Pro was a little “raised.” Not making a big deal of it I started using it, but after using it for half an hour I noticed it actually started rising. At that point I knew that something was not right. So I quickly unplugged it, turned it off and opened the bottom plate to see what may be going on. I was really surprised to see that the battery had bloated and was almost twice the size that it should have been. 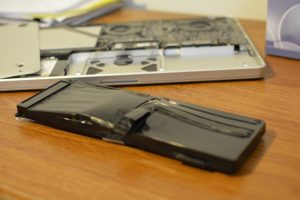 Seriously? I am very proficient with computers so I knew what to do in this case, but, for a good majority of the user base I doubt they would have realized before this would have turned into something really, really bad. I also happened to have a toolkit that had the necessary tools to allow me to open the case, but what if I was traveling or didn’t have the tools readily available? Can you imagine what would have happened if this were to continue while sitting in my bag inside a flight at 35,000 feet in the air?

Yesterday, when I finally had some time, I decided to call Apple. Interestingly, as soon as I explained what had happened they transferred me to their “safety officer.” After talking with the person and then holding for several minutes I was told to bring the MacBook Pro to a local Apple store so they could take a look.

I stopped by the Apple store and then got someone to take a look. Luckily, nothing else suffered any damage because I got to the root cause in time. They saw the battery, looked at the touchpad and said that they will just have to replace the battery. Guess what? The battery will be $120 that I will have to pay for.

I have had more than a dozen laptops in the past, and none of them really had this extreme of a problem. Even my early inexpensive Compaq laptop (I am talking early 98’s) didn’t do anything like this…and here we are, a $2,400 machine that is wanting to blow up!

Interestingly, talking to a few apple folks I found out that this has happened in the past. My quick google search revealed plenty of other folks that have had this issue. Unfortunately, I don’t have enough time right now to put into further research, but why isn’t this a “recall?”

Here are a few more pictures of the bloated battery. 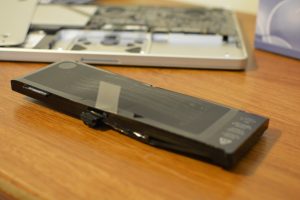 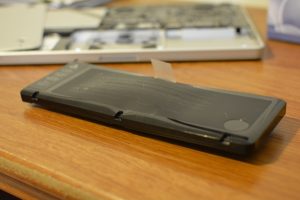 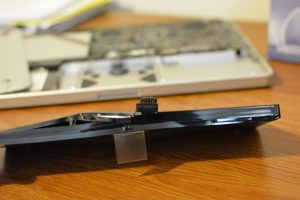 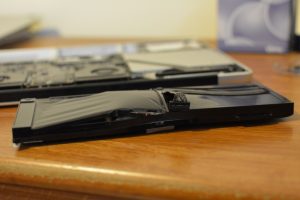