Palm Pre after one month (review)

This entry was published on Friday, September 11, 2009

I love the webOS operating system, both as a user and as a geek 🙂 One of the big reasons for going with the Pre was knowing that I will have the ability (and knowledge :)) to play around with its software. Since the purchase I have found out that I can even hack the applications provided by Palm. My knowledge of Linux, Java and Javascript/HTML/CSS along with the provided SDK makes this a very cool toy for me. 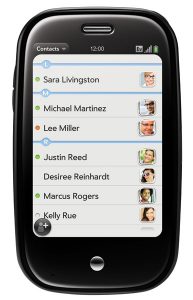 I really liked the dialer on my Windows Mobile slider phone because I could look up and call contacts without using the keyboard. Unfortunately, I pretty much have to use the keyboard when calling because the amount of contacts makes it unrealistic for finding them using flicks (unless it was someone that I recently called). The dialer is also very simplistic.

GPS signal issues in Sprint Navigation – Weird, why won’t you fix it?

The Sprint Navigation software is pretty good. I have used it a lot, but there have been times when it couldn’t get the GPS signal. Searching through Pre Central I see that I am not the only one. I have found out that calling ##GPS# (or ##477#) and getting a signal through it generally resolves this issue.

Here is a full review of Sprint Navigation by a Pre user if you are interested.

Obviously, the list of applications is not even close to that you will find for Windows Mobile or iPhone, but the community is catching up. I have found applications for all of my needs. Interestingly, I had started working on an application for myself for fun and found out that a similar application showed up before I had completed my version.

Given what I know so far about webOS and the released SDK I am doubtful that you will see any games as extensive as the ones for iPhone (like Assassin’s Creed for the iPhone!) or possibly Windows Mobile, but you can expect many simpler games.

I love the notifications on the Pre. They are generally out of your way so you can continue doing other things, but are available with a single tap when you need them. 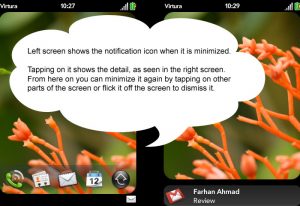 I am a human and I make mistakes, but, unfortunately, the Pre isn’t generous enough to undo them. There have been several times when I wished that the Pre had the ability to undo. The first few days I wanted it even more as I was playing around and discovering the device, e.g. cutting or copying.

Given the many gestures that this device has and some new ways of doing things (e.g. using back gesture to save your changes), I would say that the Pre is somewhat intuitive. I would definitely suggest going through the manual at least once. Once you get a hang of the gestures, your friends with iPhones will envy you 🙂

webOS is based on linux, the user interface uses Luna, a window manager developed by Palm. The “released SDK“http://developer.palm.com/ seems a bit limited for advanced applications, but it has most of the stuff that you need for simpler, cloud based applications. The development is done in HTML/CSS and Javascript so you should feel right at home if you have done web development in the past. It even uses the popular prototype Javascript library so you get to reuse your existing prototype skills if that is your library of choice (the case for me).

One thing that I hope Palm will change is give applications a bit more control based on user’s approval. I would like to write a better dialer, but the application restrictions don’t give permissions for accessing user’s complete contact list. I can see the reason for Palm’s initial decision, but I am hoping that they will revise this restriction as the operating system matures over the coming months.