“Operation change the hinge” is a success, with a few hiccups

Two weeks ago when I came home after using the tablet in a car for a few hours I noticed that the screen won’t turn and that there was a lot of bend by the hinge. I have had this tablet for about three years and the warranty had recently expired. I knew getting it fixed from Lenovo would be expensive and probably more than I was willing to pay. Luckily, Lenovo publishes the hardware guide for most of their products so I downloaded X60’s hardware manual for reference and opened up the LCD to figure out what was wrong.

As you can see in the picture on the right, the left half of the hinge was broken. I didn’t blame Lenovo for it because I have used this tablet almost everyday, opening, closing and turning multiple times in a single day. The hardware manual was very helpful because it gave me the exact part number (which, as I found out, is also on almost every replaceable part in this laptop, a big plus!) and after about 20 minutes I knew that I could get a replacement part for less $50 (including shipping).

I needed an excuse to upgrade my system and this was my perfect chance so I decided to do some research on finding a replacement laptop. After spending a few days and not finding a system that matched my “upgrade” specs (LED backlight, backlit keyboard, ideally Core i7/Calpella, 14-15” screen, DDR3, light weight, long battery life) and be better than this tablet I decided that it was better to wait. So, I ordered the hinge and it finally arrived last week.

Last night I decided to give it a try and at least open up the system. Below is a picture with all the necessary parts removed (yup, scary!). 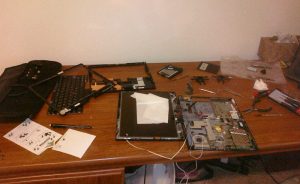 …and here is a picture of the good and the bad hinges.

After changing the hinge and putting most of the system back together I found out that the system would turn on, the hard disk would spin for a few seconds, but then everything would just go back as if the system was dead. Going in I knew that there was a chance that I might make the system unusable and seeing this behavior I was a little sad, but I decided not to give up yet.

After a long break I took a second stab and took it apart one more time to make sure that I had everything reconnected completely and correctly. When it was back to the bare bones I tried booting and, surprisingly, it booted! 🙂 So, I started putting it back together, but this time I booted the system after almost every connection to be sure that I didn’t mess it up again. After about forty-five minutes of careful reconstruction everything was back together and working. All in all the whole project took about eight hours (had to go get a new set of electronics screwdrivers) and improved my confidence in my skills 🙂 Best of all, I have a rejuvenated X60 tablet with a hinge that should last at least another two years to heavy use.