Starting a business? Make sure to read this book!

I have worked in numerous job functions ranging from front-end programming to high-level business planning and execution, and lead two businesses so far.  After recently reading The E-Myth Revisited I wish someone would have suggested it to me some time ago because it provides a great perspective, especially for folks like myself who are coming from a very technical background.

END_OF_DOCUMENT_TOKEN_TO_BE_REPLACED

See the dots connect looking backwards? What about focus?

So, Steve Jobs said “Again, you can’t connect the dots looking forward; you can only connect them looking backwards.” But if you are focused (i.e. doing what’s relevant to the end goal, assuming you have one) then shouldn’t the dots be connecting in some way as you proceed, otherwise, you are doing it wrong? Or is it that only after a certain point in life the dots need to start connecting?

“Operation change the hinge” is a success, with a few hiccups

Two weeks ago when I came home after using the tablet in a car for a few hours I noticed that the screen won’t turn and that there was a lot of bend by the hinge. I have had this tablet for about three years and the warranty had recently expired. I knew getting it fixed from Lenovo would be expensive and probably more than I was willing to pay. Luckily, Lenovo publishes the hardware guide for most of their products so I downloaded X60’s hardware manual for reference and opened up the LCD to figure out what was wrong.

As you can see in the picture on the right, the left half of the hinge was broken. I didn’t blame Lenovo for it because I have used this tablet almost everyday, opening, closing and turning multiple times in a single day. The hardware manual was very helpful because it gave me the exact part number (which, as I found out, is also on almost every replaceable part in this laptop, a big plus!) and after about 20 minutes I knew that I could get a replacement part for less $50 (including shipping).

A friend was recently looking for a used iPhone so we decided to browse the local craigslist. After some searching we saw an amazingly good deal (first red flag? :)) that included both an iPhone and iPod Touch from what seemed like a good seller. We decided to follow-up, but it wasn’t until 1am that we sent the contact email. Next day we got the following reply back…

sorry I sold them.. but I ordered them from suppliers I found from WEBSITE_REMOVED .. they have much cheaper prices than amazon.com

sorry again I hope I could have been of some help

Sent from my iPhone.

I have removed the website URL (WEBSITE_REMOVED) because I don’t want to promote it any further 🙂 I was amused by this reply because it was sent around 3am (two hours after our inquiry) and it sounded a bit too much like an advertisement. Also, I get many emails from friends that have iPhones (some of whom have decided to keep that signature!) and that last line didn’t look right. So, I decided to look further into it. The obvious things to check were the email headers to see if they had any signs of an iPhone. Before I looked at the headers for the reply I checked out the headers from a genuine reply. The most obvious sign was the X-Mailer header.

Then I looked at this header in the reply from “steve,” and guess what I found.

A quick look at that site and I found out that Chilkat Software makes .NET libraries. Well, that, along with the bogus “Sent from my iPhone.” proves that this is definitely a scam. Another evidence is the peculiar timing of the reply (within 2 hours, at 3 in the morning!), but that can’t be used to prove 🙂 Also, it was the period at the end that isn’t part of the stock “Sent from my XYZ Device” message, subtle but noticeable.

So, stay away from “steve” and the site that “steve” is promoting because that is a scam. A quick search on google also reveals more bad experiences with that site.

Earlier today I went to the Pearl Market in Beijing to check out what kind of stuff they had. Being a geek, electronics really got my attention, especially the prices. I knew most of the stuff was fake and I had heard about USB drive capacity issues, but I wanted to experience it first hand 🙂 So, I went a head and bought a 16GB flash drive. I had them plug it in and Windows reported 16GB. I also had them copy some data, but it was interesting because as more and more files were being copied the seller was getting nervous. I knew something was wrong. I was still curious so I went ahead and purchased it anyways. Once I got back to my room I decided to run a few tests and below are the results for your amusement. Remember that this is supposed to be a 16GB drive 🙂 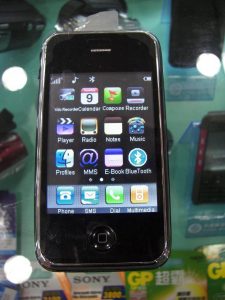 Also, on the right side is a picture of a fake 8GB iPhone. 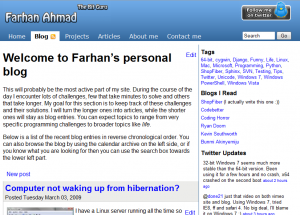 As part of my rebranding I have redesigned my personal website. As you might have noticed a little while back, I changed my twitter name from “@thebitguru” to @farhanahmad. This redesign is the next step as I become Farhan Ahmad from thebitguru 🙂 Why? you ask. Well, it is a little weird when you go to events and people recognize thebitguru, but don’t know who “Farhan Ahmad” is. I will still keep the domain name, but my name will be more prominent from now on.

For now I went for a simple design, no fancy graphics. My goal is to make minor changes as I get more time. Also, I am now publishing my twitter updates on the site.

Future of Web Apps – Miami 09 is almost here. Both Jake Lumetta and I are planning on attending. In addition to the conference, we decided to attend the Miami barcamp on Sunday February 22nd. So, let me know if you will be at either of these events. You can also follow me on twitter (@farhanahmad).

After the cold temperatures that we have lately had (<30, generally around 20s) in Madison (WI) I am really looking forward to the warmer Miami weather (65! :))

The guy who reads your fortune was fired.

I was a little bored so I decided to checkout orkut and saw the following fortune.

Why? I am guessing that because he was fired (as opposed to quitting), he was probably not good at his job? 🙂

Today I informed my remaining customer that I am departing from Epic. This marks the start of my official departure from Epic and the start of my journey as an entrepreneur. What’s next for me, you ask. I am going to be concentrating my energy on ShopFiber. ShopFiber is an exciting new service that will help you be a better online shopper and allow you to easily connect with your friends. For more information about ShopFiber make sure to checkout our blog. I will continue to blog on this site, but most of my energy will be focused on ShopFiber.

Oh, and by the way, I will be attending the Future of Web Apps conference in February. I am excitedly looking forward to that conference because I finally get to see and possibly meet some of the people that are the “voice of internet” (Michael Arrington, Joel Spolsky, etc.). Hope to see you there!

The other day I was thinking if there was a logic to how I took on new projects and actually performed them. So, last night I wrote the following python program

This is some imaginary python code reflecting my current state of mind as it relates to work/side projects. Do you have any advice for me? Code it in the comments! 🙂